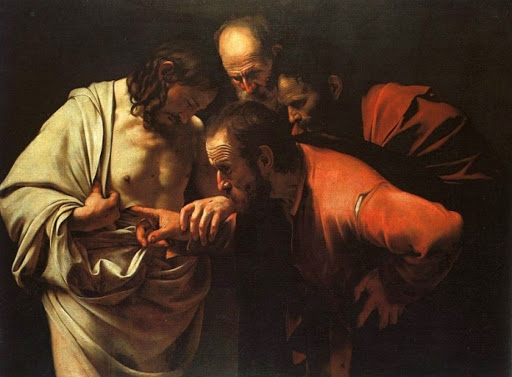 THE VALUE OF DOUBT – Easter 2

The painting you looked at (hopefully) in the worship material, is one of my favourites.  The detail is incredible.  A few short steps from this then to something else ‘unbelievable’…

A few years ago now,1997 in fact, you may remember 38 members of the “Heaven’s Gate” religious cult in California drank poison in order to keep an engagement with an alien space-ship which they believed to be flying in the tail of the Hale-Bopp comet. They believed they’d originally come from the space-ship to reside on earth for a time, but were going on to a higher destiny somewhere on a higher plane.

But what is the difference between the bizarre beliefs of the Heaven’s Gate, or other such cults, and Christian beliefs?  The early church was itself a cult in which, according to the book of Acts: “…the whole group of those who believed were of one heart and soul, and no-one claimed private ownership of any possessions, but everything they owned was held in common.” (Acts 4:32)

One huge difference is that Christianity covers such a broad sweep of opinions. We might all believe basically in God as our bottom line, but beyond that our opinions would probably begin to diverge, even within this group, and certainly within the United Reformed Church or the Methodist Church, let alone all the other branches of the Christian church.

This is often considered to be a weakness. How can we spread the Good News to others if we don’t even agree on the content of the Good News? But I think we should celebrate the broadness of our faith.

Christianity, even from its origins in the OT, has always had divergent opinions and beliefs. And it’s that very divergence which keeps us safe from too gross a distortion of the truth. None of us, no branch of the Christian church, and no individual, has the whole truth. We all distort to some degree, and we all have our own insights. And it’s those varying insights which help to keep our faith balanced and sane.

Just as the disciples, the community of faith, accepted and included Thomas when he refused to believe their witness about the risen Christ, so the church of Christ is inclusive, welcoming all-comers. Even those who are unable or unwilling to toe the party line. The main-stream churches take seriously the anti-cult words of Colossians 2:18: “Do not let anyone disqualify you, insisting on self-abasement and worship of angels, dwelling on visions…”

And of course, it was in fellowship with the community of believers that Thomas eventually could see and believe. And this same courageous Thomas, who had the integrity to stand alone and isolated in his beliefs, but also the humility to change his mind, went on to become the founder of the Christian church in India.

This gospel story of Thomas reminds me of all the people I’ve met in life who were right and I was wrong. Who tried to tell me something, but I wasn’t in a position to accept it or believe it. We all develop a mechanism for dealing with “I told you so!” people. Or those who try to manipulate or pressurise us into belief. Their hearts are in the right place, but they want to spare us the pains of growing up. They want to spare us the struggle we all must experience. The struggle for truth. The struggle, like Thomas, to reach our own belief.

Those who are most effective in assisting with life’s journey with all its struggles, are the ones who are prepared to stand by with the bandages and the ointment ready. Those who know they can’t take my place in the struggle, even though they might wish they could. Those who won’t ride rough-shod over doubt or questions, even though they know it might save a lot of grief if they did. Those who are most effective provide a safe place for struggle, questions, growth. Just as the disciples provided a safe place for Thomas.

But that requires a great deal of love. The sort of love cult leaders refuse to offer. Cult leaders are unable to take the risk of allowing people to think for themselves. They demand absolute unquestioning obedience to their interpretation of the Scriptures, even though they often take a small portion of the gospel and turn it into the whole package, overlooking Jesus’ concern for compassion and justice and healing.

I wonder exactly what it was Thomas had such difficulty in believing.

Perhaps not the resurrection. He may have been perfectly able to accept that someone had stood amid the disciples. But perhaps he needed to be certain the one who was raised from the dead on the Sunday was the same one who was crucified on the Friday. Perhaps Thomas wanted to verify that the crucifixion and resurrection of Jesus wasn’t some cruel hoax perpetrated on a desperate humanity. Perhaps he wanted to make sure the risen and glorified Christ was also the suffering and dying Jesus.

And maybe we need that too. Show us the marks Jesus. We need to know

Cults are not about love and justice. Nor are they about rising again. In the end, they’re about death, but nothing more. About the death of individual personality. The death of the desire for truth, however unpalatable that truth might turn out to be. And ultimately, some cults are about physical death, too. About snatching at equality with God by determining when and where and how to die. About jumping the gun and rejecting all the good gifts God has for us in this life. 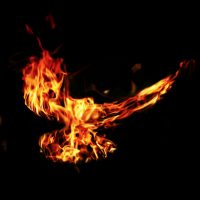 Look out – it’s the Holy Spirit!

This site uses Akismet to reduce spam. Learn how your comment data is processed.